I don't think the 3.70% rate for Canadian dollar TD Investment Savings Account (TDB8150) is effective yet.

This change is not yet reflected here: https://www.td.com/ca/en/asset-management/additional-solutions/

And the consistent laggard CIBC (Renaissance) just went up to a consistently noncompetitive 3.65%.

Its now pretty clear that they are "laughing all the way to the bank", by intentionally not competing and making money. Until business is lost, but maybe they don't care.

It's not so bad being senile; you get to meet many more people.

This change is not yet reflected here: https://www.td.com/ca/en/asset-management/additional-solutions/

That's likely because the higher 3.8% rate for TDB8150 is effective today and not yesterday:

I just discovered this forum and have read the posts re. DYN6004. I'm astonished that Scotia iTRADE offers a HISA (F "fund") at a present 4.25% in CDN dollars. Before asking a few questions I'm thankful to anyone who takes the time to respond, and I'm sure many in Canada would be happy to be in my shoes.

I'm presently with TD and have no intention of switching to Scotia. It will remain my main trading platform. However, right across the street from TD there's a Scotia branch where I have a small cash balance. At the same time I have a substantial 6 figure cash amount in TDB8150 (3.8% today). Recently, Scotia sent me an offer - if I sign up for an iTRADE account before March 1st and deposit an amount before March 31 and keep it there until the end of June they will give me a cash reward in July. The reward is based on the amount you deposit but it's up to $2000 ... well I won't get that amount but it's still nice. They did not specify if I need to make a trade, just deposit some cash. For the extra interest rate oomph and reward ... why not? Now, I'm thinking "What's the catch?". As said - no intention of switching my main gig to Scotia BUT ... liquidate TDB8150, walk across the street with a draft (no fee), deposit it into my Scotia cash account, then transferring to the new iTRADE account after setting it up, buying DYN6004 (if I still can but there's always DYN6000 at 4.15%). It's my understanding there is no commission to buy and sell, and the advertised "trailer fee" does not apply to the retail purchaser - I get to keep the full 4.25%. If need be is there a penalty for what they would call an early "redemption" (let us say after the aforementioned June date)? And yes I understand this is not a mutual fund so the word redemption doesn't really apply. Also I know there is an inactivity fee (read $25 or $30) every quarter if I don't make one commissionable trade however I don't think this applies to a 6 figure amount and for an interest rate that good why would I.

Am I otherwise missing something?

Its my understanding that usually you have to have a discount brokerage account to buy the 'captive' ISA without any fees, in this case Scotia iTrade. Until you mentioned that inactivity fee, I was going to say, "why not go ahead", as without that there's no downside and some upside, plus diversification.

I'd find out if in fact that inactivity fee can be waived under certain conditions. I'd also compare the trading fees charged by TD and Scotia. When I left TD there trading fees were too high, but I know nothing about today's comparisons.

If it was me and the Scotia trading fees were lower, I'd consider moving (as stock sales happened) from TD.

Just another 2 cents worth

It's not so bad being senile; you get to meet many more people.

You do not appear to be missing anything. I haven't attempted to verify what you have said but with all my years with Scotia iTrade, your understandings match mine.

I don't think you have to make any commissionable trades to receive the cash bribe or to avoid inactive fees. The key to both, as I understand it, is account size without qualification as to type of holdings. For example, I make only one trade per year in my TFSA (in January) on a singular holding (VEQT) which also distributes only one distribution per year in January. So once January is over, absolutely nothing happens in that account the rest of the year.

I don't see why DYN6004 (or DYN6000 if it defaults to that) is not a legitimate holding for the 90 day minimum period to catch the cash bribe. Ultimately, if iTrade continues to be a leader in ISA rates, you'd presumably continue to stay there. My depreciating nickel's worth of opinion......

P.S. There is no commission to buy or sell DYN6004 at iTrade. There is no trailer fee attached to DYN6004, like there is for DYN6000 (and thus the difference in return).

Hotspur said
… Also I know there is an inactivity fee (read $25 or $30) every quarter if I don't make one commissionable trade however I don't think this applies to a 6 figure amount and for an interest rate that good why would I.

Am I otherwise missing something?

Scotia iTRADE waives the $25/quarter low activity account admin fee on non-registered accounts when one meets at least one of seven conditions.

Condition #2 is a commissionable trade in the past three months. There is also Condition #5, having a total account size of more than $10,000.

The fine print is in footnote #2 at the bottom of the last page of their fee schedule.

isnt it true most brokerage accounts will waive annual fee as long as one has $25k asset, something like that ?

Scotia iTRADE will waive its $100 annual fee on RRSP, RIF, LIF, and LIRA accounts if one meets at least one of three conditions.

The $100/year fee on certain Scotia iTRADE registered accounts is not the same as their $25/quarter low activity admin fee.

I hardly trade dougjp and have substantial capital gains with TD and lots of steady tax efficient income so need to move anything except the cash if there is an opportunity. I'm pretty sure - and as Norman1 indicates - that as at TD a high balance - the cash transfer is over $250,000 - means zero administration fees at Scotia. I can't see anything on the radar screen that would mean otherwise ... yet. Norman1 I just read footnote 2 which you kindly posted and looks like I'm good to go.

Can I set up DYN6004 so that the monthly distribution is not reinvested but paid into my cash account either within iTRADE or my regular Ultimate Package account? I don't think the latter is permitted by the Office of the Superintendent of Financial Institutions 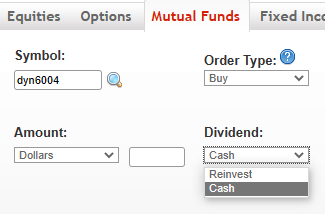 That will cause any interest paid to be sent to the Scotia iTRADE account instead of reinvested.

It is allowed. But, Scotia iTRADE doesn't have the backend system to automatically transfer varying amounts of cash from one of their accounts to a bank account. BMO InvestorLine does offer a service that sweeps any brokerage account cash overnight to a companion AccountLink BMO chequing account.

The online 'transfer' tab though with Scotia Online makes it easy to transfer cash distributions from the iTrade account to a Scotia chequing account.