I was just cleaning up the Promos page and noticed that Tangerine has another new customer promo. The previous one expired on February 5. This one gives new customers 2.50% for 6 months if you open a savings account by May 31, 2018: https://www.tangerine.ca/en/landing-page/save-easy/index.html

What does this post have to do with Tangerine, the express purpose of this thread? The DUCA Financial offer already has its own thread.

What does this post have to do with Tangerine, the express purpose of this thread? The DUCA Financial offer already has its own thread.

To let people know that there are better alternatives out there than 2.5 % .

As I understand it, they are a niche player for Ontario residents. Also, since many of us wouldn't consider anything not CDIC insured, that pretty much takes them off most lists.

AltaRed said
As I understand it, they are a niche player for Ontario residents. Also, since many of us wouldn't consider anything not CDIC insured, that pretty much takes them off most lists.

It is often difficult to decide where to respond to certain issues on this site. "rfdm4g4g9" is not wrong to bring up comparisons or reference points in what appears to be an unrelated thread in order to show some perspective. Comparing Tangerine (a federal bank) to Duca (an Ontario credit union) has relevance to at least some of us. I appreciate the gesture. I must say though that sometimes the conversations in these threads do seem to go off on a tangent.

As I have said before, everyone in entitled to evaluate his/her own risk tolerance level based on available information. CDIC insurance appears to be quite solid, as does DICO, which is provincially run. The Manitoba credit union insurance (DGCM), is overseen by the province, but not guaranteed by it (which may bother some investors). All deposits are guaranteed under this plan. There is a similar plan in BC. The people who read this blog have interests in many areas and hope to learn from the experiences of others. Just because I may not be interested in one type of investment, doesn't mean someone else isn't.

personally i hold ontario insurance higher than CDIC.
if someone big tanks such as td or rbc, i question cdics ability to handle the load
where as if DUCA tanks, ontario insurance will more likely hold the load. Also it is 250,000$ insured

I can live with the tangents much of the time because the discourse is usually high level and interesting.

But back to Tangerine: I think after all our obsessive attempt to figure out their algorithm that it was likely quite random. Surely though it helped them collect a lot of info in understanding our investing behaviour. Now that they have started offering a fixed (lower) rate, will we be satisfied, and less likely to jump around?

Does anyone who reads this forum not already have a Tang account? Despite all the negative commentary on them (some of it from me), I still think they are one of the most competent online banks around.

Saver-Mom, I agree Tangerine has a fixed lower rate of 1.1% but those who ask are getting a limited-time 2.5%, if I remember right, and that's close to the best rate out there right now. At this point, I agree, people are less likely to jump elsewhere from Tangerine.

Sorry I meant fixed meaning everyone now being offered the same rate in their promos, and lower meaning 2.5% which is not bad, but lower than Simplii and others, and lower than their previous recent offers...if they stop the special offers over 2% I think people will leave in droves

AltaRed said
As I understand it, they are a niche player for Ontario residents. Also, since many of us wouldn't consider anything not CDIC insured, that pretty much takes them off most lists.

You don't have to be ON resident to use them. Lot of BC residents on this forum have an account with them.

They have $ 2.2 Billion in assets & 60,000 members and have been around for almost 70 years ! They are not going anywhere anytime soon.

Its a question of 3 months only, to park money over there for 3.15 % till May 31, not a bad place to do that, until something better comes along from either Tangerine or Simplii.

According to the Duca website, membership is only open to Ontario residents. Also, when you go through the application process, the only province choice for your residence address is Ontario.

I do not believe anyone has mentioned the wording of Tangerine’s NEW deal.
They clearly state “new” accounts and “new” members and NOT newly deposited money.

Years ago I filed a complaint to the banking Ombudsman, or better stated the banking Ombudswoman in regards to ING/Tangerine’s underhanded practice of offering secret undisclosed interest rates of up to, two percent higher than their posted rate. These deals were being offered to a select clientele and I seeked damages as a result of a lost of return on my money. The Ombudswoman’s response was… financial institutions can offer any rate, to anyone they want. I argued that it was a very selective process, ING was founded on ONE (1) rate for ALL, not secret backroom deals.

I moved all of my money to Outlook.

Has anyone moved new money into an old Tangerine savings account and received the spring bonus of 2.5%? I want to see what happens on May 31st when the Winter bonus ends. Will June 1st deal be "new money", or "new account/new member"?

rfdm4g4g9 said “You don't have to be ON resident to use them. Lot of BC residents on this forum have an account with them.”

My reply from DUCA states
“Good afternoon and thank you for your inquiry.

DUCA is an Ontario Credit Union and, as such, Membership in DUCA is restricted to Ontario residents.

I was out of luck!

My 2.5% with Tangerine ends today.

2.75 % for 270 days on ENTIRE balance is being offered to select targeted customers by their marketing department.

Try to mention that if & when you call in. Very unlikely they will give it to you, but worth a shot, nothing to lose.

Called Tangerine. Was offered 2.5% for 180 days. Didn't accept. Had requested a returned call from their outbound dept. My call was returned later that day and was still offered the same. No 2.75% for GamGam! Happy with Northern CU! Off to Meridian CU! Thankyou rfdm4g4g9 for thinking of me. Appreciated.

Looks like the new customer promo is now 2.75% for 6 months + $25 cash bonus with initial $100 deposit when you open an account by October 31, 2018: https://www.tangerine.ca/en/landing-page/save-money/index.html 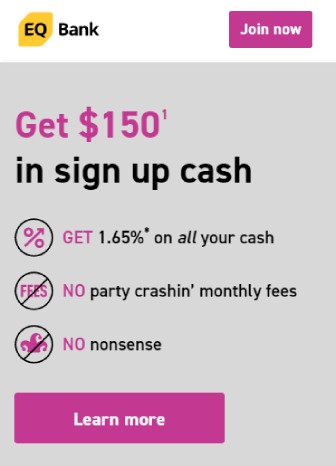