To Lockdown or Not to Lockdown

To Lockdown or Not to Lockdown

I didn’t realize this was happening!

Fake news perhaps, they are touting Japan's health system being on verge of collapse to spook and prolong here in the final week before the economy begins to open. Far far more damage caused by closure. It's an economic overthrow more than anything enabled by who not sure. I don't know anyone who knows anyone who caught it, do u?

Vatox ,
That's probably because you are getting your information from "trusted media sources" which are all under the control of the WHO , whose largest funder is bill gates , whose mission is to inject the world's population with vaccines . I previously provided links to a global pandemic simulation exercise that was conducted in October 2019 in New York by the world economic forum . This was livestreamed and can be accessed on their website. What is happening around the world is that global governance is being instituted under the guise of a plandemic.
As far as the media coverage , this was referred to as a "flood stategy" where they would have a centralized message that would be spouted by all the corporate media . That is why they had a representative from nbc at the table.
Turn off the tv and do some searches on the internet. Go to bill gates instagram and see what the comments are. Put his name into a search engine with vaccine and see what pops up.
https://www.centerforhealthsecurity.org/event201/

Sweden took a different path in their fight against the corona virus.

It will be interesting to see the outcome in Sweden, as compared to other countries. With respect to politics, economics and infection totals.

I don’t understand what you are saying Oscar. Are you saying Bill Gates wants to shutdown economies to force people into wanting vaccines in order to return to their needed work and income sources?

Vatox said
I don’t understand what you are saying Oscar. Are you saying Bill Gates wants to shutdown economies to force people into wanting vaccines in order to return to their needed work and income sources?

No Vatox , just linking some info that some may find to be informative.

the giving pledge is a tax scam for gates n his cronies. im suspicious of many african schemes. many bogus scientists in the world. sweden right approach. full shutdown risky for middle economies including canada. targeted hot spots better.

This site, if you scroll down a bit, has a chart of all countries which you can order by deaths per million population (right side of screen). So you can see, for example, Sweden's deaths per pop is higher than USA, etc.

Of course each country compiles its stats differently, some are more forthcoming than others, etc, etc, etc - i.e. stats can pretty much show anything, at the end of the day.

What an interesting post. I have been following the statistics from Sweden and here they are, compared to their neighbours.

If you want to coment on Sweden's policy of a 'partial lockdown', you should compare cases per million. For clearly, the death rate from people who are infected can't be attributed to the lock down policy, while the cases per million population certainly can be.

I see no real difference (approx 10%) difference in cases per million. Given that there may be a lot of social harm from complete lock downs (i.e. unemployment, family breakdown, suicides, bankruptcy, etc.), I think Sweden's policy is the right one.

I mention that Sweden is partially locked down. The elementary schools are open, while the high schools (for those over 16) and universities are closed.

And while bars and restaurants are open, large gatherings are prohibited. The Swedes are a homogeneous society, with a high level of social responsibility. They seem to rely on the good sense of their fellow citizens to do the right thing.

I suspect that this would apply to Canada as well, if only our betters trusted us to do the right thing.

Heres a hint folks.. Kung flu has been out over a year - I had it LAST YEAR - ALL Governments knew this existed prior tho this media fueled hysterical shutdown.. ... The shutdown was unnecessary - this is a flare up. Antibody testing are already showing 50%+ recovered.. None of the current models or #s shown can be trusted.. Just saying... This is the biggest fraud ever.. I love Trump but even he missed this one.. Everyone did.. Maybe it wasnt called kung flu but the worlds response was equivalent to 1918 pretty much in spreading that there actually is a mystery virus.. Internet be damed... I don't believe for a second people didn't know at some level..... Guaranteed theres alot of people who sold prior to the decline - knowing they had the "mystery virus"...

One of my theories is that governments (big 7 ish etc) were waiting for this virus to top over 60% of the world population and due to how viral it is (1000x more virulent then influenza) the shutdown will actually herd immunize everybody.. Thats the hope lol.. Expect vaccine costs at 10K per shot or something....

Interesting, Rodster, I kind of look at it a bit differently. To me cases don't mean much, it's clear there's a huge range of extent of testing among different countries so case numbers will vary greatly. I'm more interested in how many people die of Wuhan virus per million population, seems to me that's the bottom line stat.

Most humans regularly use the top part of their lungs only (especially the older/more sedentary they get), the unopened bottom part is stagnant and stale so my personal theory is that's where the virus likes to set up shop & gather strength. So I exercise or do something to get out of breath, to open up and discharge the whole lung capacity, a few times a day, and I figure I'm good to go. Some will claim that any regime not involving alcohol consumption is bogus, maybe they're right, guess time'll tell.

Bill said
Interesting, Rodster, I kind of look at it a bit differently. To me cases don't mean much, it's clear there's a huge range of extent of testing among different countries so case numbers will vary greatly. I'm more interested in how many people die of Wuhan virus per million population, seems to me that's the bottom line stat.

It's hard to argue with your comments about testing approaches being different, depending on the country. But that's true of death rates as well.

And while you are more interested in the death rate from Covid-19 than the infection rate, it doesn't take away from the fact that infections are more likely correlated to the lock down policies of a country, than death rates (even if their calculation may differ from country to country).

Going on the assumption that testing rates and accuracy are similar and that age demographics and health issues in the populations are similar, the thing I look at is the curve rate of infections. Norway is right next to Sweden and half the population. Look at the curves. 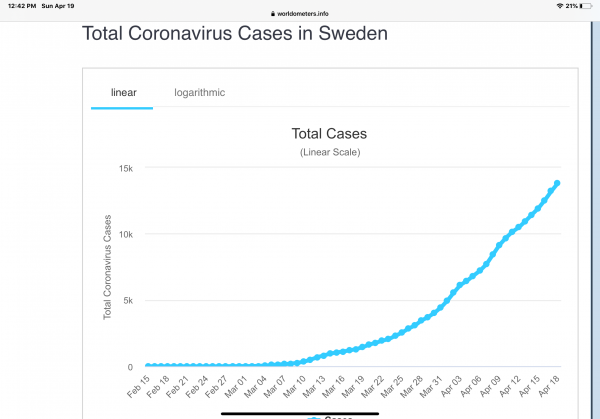 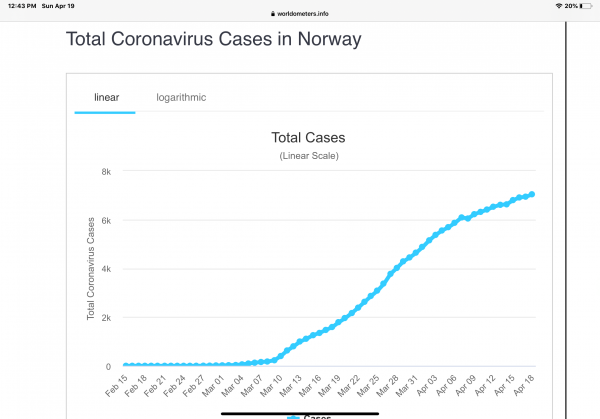 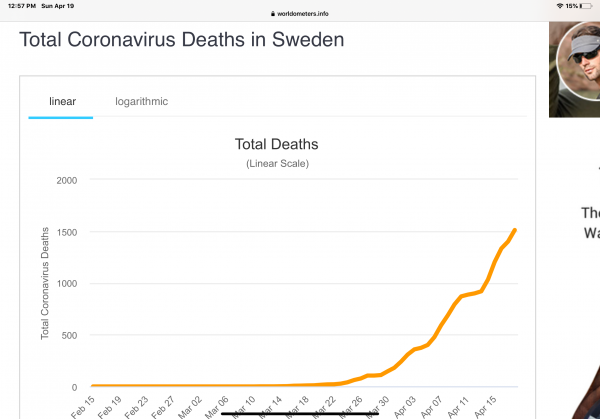 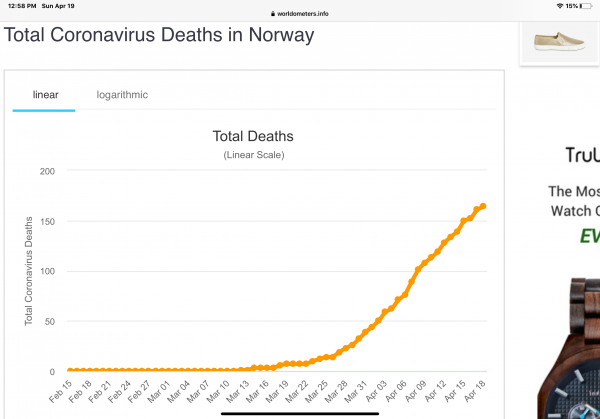 Robert F Kennedy junior wrote an open letter to Cnn's Sanjay Gupta. Here is a link if anyone is interested
https://childrenshealthdefense.org/news/flu-misinformation-and-coronavirus-fears-my-letter-to-dr-sanjay-gupta/

the curve means nothing a vaccine means nothing it's the media narrative. its about the stimulus money, gettin peeps back to work n growin the economy. will this round of stimulus rocket boost the economy more than 09 or trumps tax cuts?