Response from ombudsman to complaint about targeted promotions

Response from ombudsman to complaint about targeted promotions 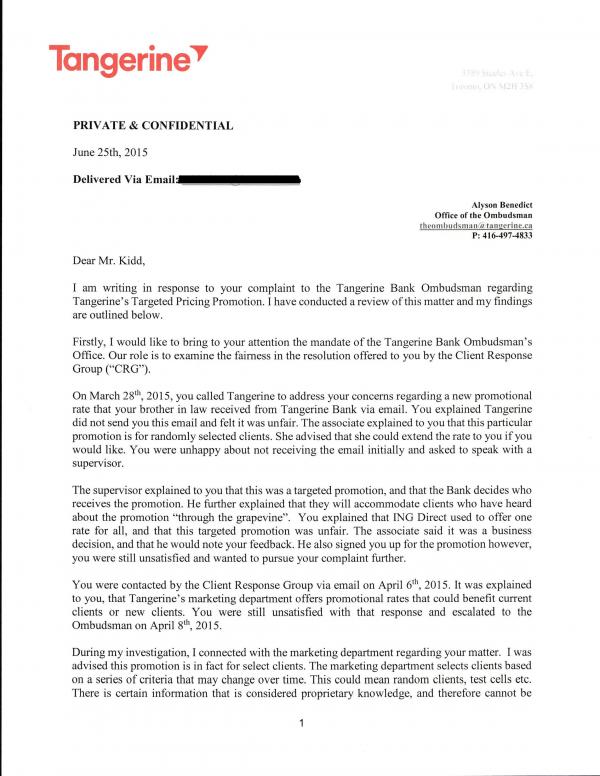 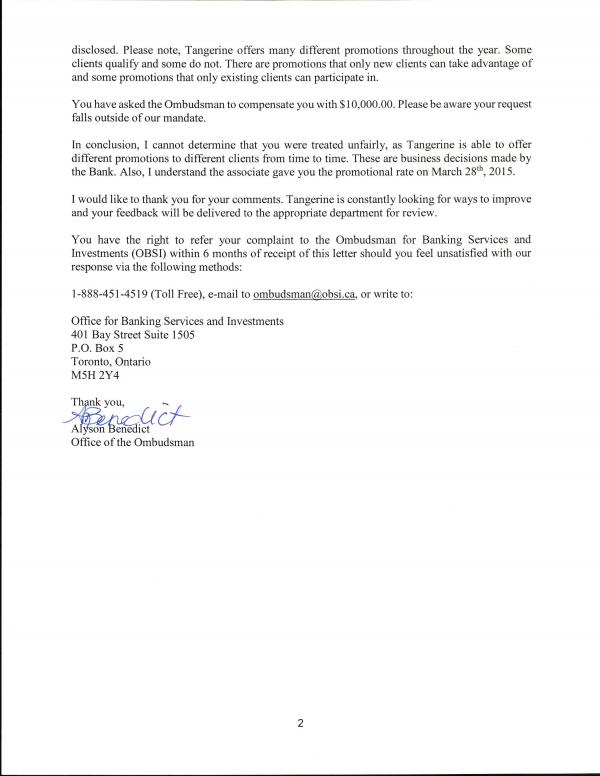 Your complaint was 3 years ago??

Your letter is a very interesting post ... since most members, including myself, would like to better understand what are the RULES for Price Discrimination of Canadian Financial Products offered by Banks and Credit Unions.

i.e. how are banks able to offer the same financial product to different customers at different prices.

We all know that this exists but we do not know what are the Canadian financial regulations banks/credit unions must comply with.

Price Discrimination: This involves charging a different price to different groups of people for the same good. For example – student discounts, off peak fares cheaper than peak fares.

"Generally" , a company must charge the same price for a "product" to all customers ..however, they may offer Customer A better discount if they purchase a higher quantity that Customer B.
It is the same with banks offering a higher interest rate for GICs >$100K.

Perhaps, we have a forum member who is more knowledgeable with the regulations and can post in the forum.

Unfortunately, I think that in your situation, the bank offered you the special rate, offered to include you in the special group offering, so I will assume they are compliant with the rules and there is no recourse.
You asked for the special promotional rate and they finally complied.

My conversations with Tangerine were more heated than they sound before i brought this matter to the ombudsman. Yes, Tangerine were being very very selective on "whom" would be offered special intetest rates. I was bothered because i could see no reason why these deals were so secretive, so selective. I questioned, how many of these hidden deals had i missed? It also seemed... once i became aware of an offer, i became entitled to such offer. Which seemed wrong.

I only recently transferred money back to tangerine, to take advantage of their 2.5% offer. On June 1st, i will first have tangerine confirm their highest rate being offered, and then i will demand the same.

The link above illustrates the wages paid to the sales rep you speak to at tangerine. At 30k they don't really care if you move your money out or not. Reach a little higher into the tree to get what you want

From the Tangerine Ombudsman letter cited above -

"The supervisor explained to you that this was a targeted promotion, and that the Bank decides who receives the promotion. He further explained that they will accommodate clients who have heard about the promotion "through the grapevine.""

That's an interesting comment from the Ombudsman - I guess it means we can ALL call up and receive the latest 2.75% / 270 day offer - CORRECT????

The current term of my 2.5% savings account agreement runs to may 31st 2018. I would say at that time, i should be able to get the best rate available for another term.

This doesn't indicate to me that the Ombudsman for Banking Services and Investments has taken up an investigation, although they probably will do at least a basic investigation, nor that there might be light at the end of the tunnel on this, as Top It Up alluded to in another thread on these forums about a 2.75 270 day HISA targeted promotion from Tangerine's marketing department.

Your demand for compensation in the amount of $10,000 is, frankly, ludicrous. It is completely ridiculous that you would expect such an amount for what purpose...a gesture of goodwill? If you'd asked something like a $25 Starbucks gift card or a credit to your account in an amount of $100 or less, it might have been given and you probably wouldn't have had to go to the Tangerine Ombudsman either.

Don't get me wrong - it's well known on here my dislike for Tangerine's targeted promotions, but I don't think they've done anything wrong here. Even if, in the unlikely event that the OBSI were to admonish Tangerine for the targeted nature of the promotions (and why would they when targeted GIC rate offers and mortgage promo specials are permitted!?), all it would do is eliminate these promotions altogether and, perhaps, lower HISA interest rates across the board. Without targeted promo offers from Simplii and Tangerine, companies like EQ Bank and Alterna Bank, among others, could lower their rates knowing they're already "top dog" in town. 🙂

If you want to make a worthwhile complaint to Tangerine, tell them about their new online banking system, the poor categorization of transactions with no way to opt out, and the lack of transaction narrative detail for ABM withdrawals/deposits and ChequeIn deposits.

P.S. I gathered your "language" was, erm, more "heated" than the tone of that response would suggest. I suspect the Ombudsman's office had to bite their tongue on this one. Note the diplomatic language about you simply "complaining" or "inquiring" and the "supervisor explained."

Added edit.... maybe giving me the special rate that they offered my brother in-law was their attempt of appeasing me but it did not work, i was not interested in being bought off... i wanted answers, i wanted to know why Tangerine could make back room deals. They selected who got the higher interest rates, it was not a case of haggling for the best rate, THEY pick and choose who gets it. You get 2.75% and i get 2%, case closed.

Still in my mind... this is wrong. You can call it discriminatory. And Tangerine would not disclose A) how many offers that i had missed. B) this was not a case of a "new member account" vs an "existing account" BOTH my brother in-law and i had old ING accounts. I argued ING prided themselves on "one rate for all" from your very first dollar.

Two things: I never said anything about your letter being "discriminatory".

Second, you make all good points and, while I'd like to see them be more transparent, too, given their history, it isn't going to happen. I'm in the process of a multi-year phasing out of my Tangerine business, which is sad. I might even open up a Simplii Financial account instead.

Tangerine's interest rate practices are on the verge of being discriminatory. This statement had nothing to do with your comments.

You may have noticed that I have edited a few of my posts regarding this topic because... you never know who is read these posts. I had addressed your concerns over the compensation amount that i was seeking, and i have removed that text.

It's different where services are provided by the public sector, such as health care, where everyone is entitled to a certain level of service and you have no option, e.g. health care is publicly run, you have no option but to use your health card, no option to pay even if you wanted to. (But now that I think about it there are even different bus fares based on age, frequency of use, etc.)

So to me it's a stretch to call this discrimination, particularly when you are under no obligation to purchase anything you don't want. If you don't like the deal Tangerine offers you are free to ignore it.

But if it is discrimination then pretty well everybody here discriminates too, i.e. we put our money where we get our best return thus discriminating against those who offer lower rates. Same thing, just from the other side.