RATE DECREASE NOTIFICATION
As of this morning, our interest rates have gone down. This includes our high-interest savings rate, which is now 2.25%.

This rate change does not effect any current terms you may have set up.

Yet 'Another' series of rate reductions @ Hubert ... and More Indication that Hubert has lost its Luster.

Time to move our money Elsewhere !

Too bad that Hubert keeps lowering its rates, to levels below the best out there. Alas, I will be moving most of my money out as a result. However, Hubert is still one of the best hubs for initiating electronic fund transfers, since they allow you to connect with so many outside FIs (I have 9 outside links via Hubert). Thus I continue to use it for moving cash from one FI to another, where I cannot establish a direct link between those two.

It looks like The Good Ol' Days at Hubert are gone now ... sad

I'm starting the process of moving my HISA money out of there.

Their rates may be going down but the service is still topnotch.Yesterday & today I started 2 transfers from here to Tangerine in the morning.Both days the funds were in Tang before 6:00 PM & Tang did not have holds on either transfer.

Another decrease as of this morning. But what 2 decreased......poorly done message, Hubert!!! 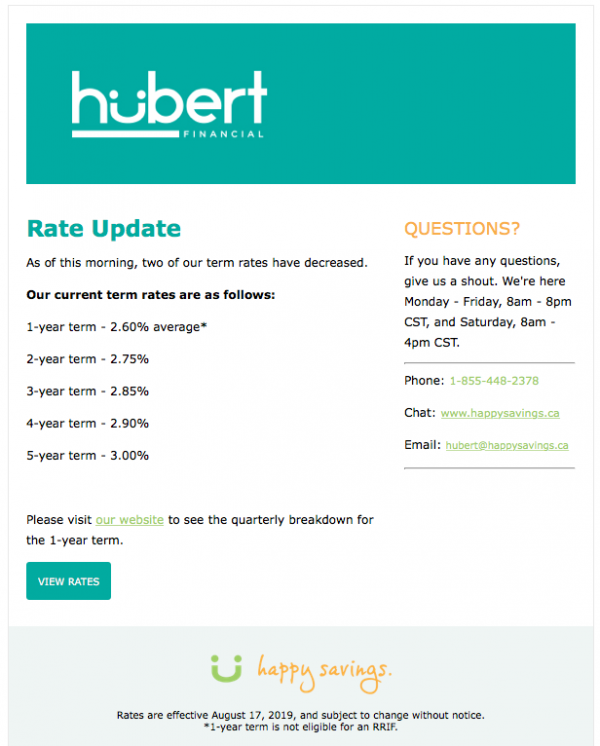 GICinvestor said
Another decrease as of this morning. But what 2 decreased......poorly done message, Hubert!!!

Agreed...it could've been better. 4-year decreased from 3% to 2.9% and 5-year decreased to 3% from 3.1%. They said as much, but only in the subject line. They should've stated that in the body of the e-mail message.

As I've stated elsewhere, I think the 4- and 5-year GIC rates are the most vulnerable to dropping rates the banks and credit unions basically make them the same as their 3-year GIC rates, so I would expect further drops on the longer end of the GIC rate curve until such time as they need to lower rates in all terms. There will be no advantage to locking in rates for 4-5 years in the sense that you will not be paid a premium for the extra term length. Only advantage would be if you see GIC rates going lower and staying there for 5 years then you'll get an extra year at the lower rate.

oops I missed that. But nevertheless they could have put some pointers on the ones that change like a * or <$

GICinvestor said
oops I missed that. But nevertheless they could have put some pointers on the ones that change like a * or <$

Completely agree that could've been clearer in the e-mail message body, like, "Sorry, friends, but our 4- and 5-year GIC rates are dropping, albeit very modestly, by between 0.05-0.10%, and updated rates are as follows:"

It's a good thing Peter maintains this GIC rate history, as time consuming as it likely is:

This morning's email announcing the rate drop came from a different email account /domain than previous Hubert emails: info@sunovacu.ca instead of the usual happysavings.ca

Additionally the template of the email is different, as well as the "tone" of the communication. As was stated by Doug, "the e-mail message was less "fun" and more "bank-like"

Could it be that Sunova, the parent of Hubert is taking over administration of Hubert perhaps explaining why policies, rate incentives and tone have appeared to become more "bank-like"?

Nehpets said
This morning's email announcing the rate drop came from a different email account /domain than previous Hubert emails: info@sunovacu.ca instead of the usual happysavings.ca

Additionally the template of the email is different, as well as the "tone" of the communication. As was stated by Doug, "the e-mail message was less "fun" and more "bank-like"

Could it be that Sunova, the parent of Hubert is taking over administration of Hubert perhaps explaining why policies, rate incentives and tone have appeared to become more "bank-like"?

How astute. I would have never looked for what the sending email address is!

I have googled Sunova a few times and they list branches and the “Managing Partners” name. It appears the Hubert we deal with is in the headquarters branch north of Winnipeg in Selkirk. I drove that way once along the Red River and hit a junction and we stopped at Russian antique store. It was new and huge. But did not find a whole lot of large communities along the way. I doubt if Selkirk is that big and probably only has one branch. I just wonder if the other branches listed are a booth in an existing store (like BMO tried years ago in the Safeway stores or like Sears had Catalog sales and pick up offices within)?

I do know that the same employees at Outlook Financial do both Outlook and Assiniboine Credit Union work. And I do know that Accelerate is situated in Crosstown CU In downtown Winnipeg close to the new stadium. Not sure if Accelerate and Crosstown are handled together or separately. My guess is separate as you usually talk to the same 3 ladies. BUT.....since Accelerates conversion I have spoken to different ladies and I assumed they put extra help into Accelerate during the conversion......and I could be totally wrong as maybe the conversion amalgamated the people too and they too have dropped their rates.

Did something happen to the regulations in Winnipeg for credit unions?

Interesting, Nehpets. I didn't note the different e-mail address, so good eye. Hubert Financial has always operated out of the Sunova Credit Union head office, but it's a small team of a half dozen or perhaps a dozen employees now that, presumably, works in an area adjacent to the Sunova Credit Union Help HQ contact centre. However, as Stephen noted, Hubert has kind of done their marketing separately (indeed, Hubert has never had a Twitter and Facebook page, which is why I follow the Sunova Credit Union social media pages and all their cute D.O.G. posts - if only our @Bill was a furry, cute, cuddly, and slobbery as the D.O.G.s! 😉 ), so perhaps they are trying to centralize the marketing and have Sunova Communications handle both Sunova and Hubert.

As for AcceleRate Financial, they did migrate their core banking system and I noted that they now share the same Member Contact Centre of Crosstown Civic Credit Union, so perhaps it's something more like Sunova/Hubert in that the contact centre serves both AcceleRate and Crosstown Civic customers but AcceleRate still has a small team during weekdays to process applications and conduct account reviews.

I find it amusing that significant competition for Bay Street is a bunch of rustic communities in Manitoba. David and Goliath?
Rent is cheaper too

Geez...why all the doom and gloom? Little early to be starting a run on your deposits. Their GIC rates are still at the top of the list. With the downward trend in rates lately, I think they are holding quite well. Certainly better than others.