Savers Roundup May 2020: a minimum 2.00% return is what you should be getting

Canada's CPI at end of August running at about 2.8% annual rate, so savers in lowest tax bracket need about 3.5% (depending on province of residence) interest income just to stay even.

Bill said
Canada's CPI at end of August running at about 2.8% annual rate, so savers in lowest tax bracket need about 3.5% (depending on province of residence) interest income just to stay even.

don't use the summer driving season as your inflation value. Gasoline price is skewed. Use the average.

If we want to get picky, even annual CPI on a national basis is only a rough guide. It varies by province and even by city, sometimes significantly. Annual in Ontario really is 2.8 right now.
https://inflationcalculator.ca/cpi-basket/
It also depends on your age and lifestyle as to how much you will spend proportionately in the various categories, as opposed to the average as designated by CPI. I imagine that almost nobody fis exactly into the formula. As a simple example, those paying a mortgage or rent will be in a different situation than those who have paid off their home.

You can really only assess the impact of inflation and taxes accurately for your own situation after the fact. And, even then, it's a lot of work to figure it out - I've tried. Best to just keep an eye on your net worth IMO.

Always find CPI not reflected true actual spending price increase. For example, food court price inflating is definitely more like 10% every year. Gasoline is all over the map so could be +/- 10% any year. Insurance prem hike each year typically more than inflation 99% of the time. Telcom bill price hike above inflation too... Those are some of the big ticket items for average household

Only items I can think of casually that has price hike less than CPI would be something like TV, milk, egg....

I know CPI measures a "basket" of goods but based on my actual spending behavior / bills to pay, my "personal" price inflation is much higher.... 🙁

Vatox, 2.8% is the annual rate ending in August, not the skewed seasonal rate.

Everybody says CPI understates their own personal inflation rate, lol.

Last time when BOC increased interest rate RBC ISA was increased on the same day.
Certainly not this time
It is already the 2nd day.
From what it shows, it is still 1.35%
http://www.rbcroyalbank.com/pr.....ducts/isa/
Did I miss something? Or they just don't care.
Sad thing is that from observation in past years, RBC kind of has to be the one doing it first to set the rate. No one ever did it before RBC.

Bill said
Vatox, 2.8% is the annual rate ending in August, not the skewed seasonal rate.

Everybody says CPI understates their own personal inflation rate, lol.

The 2.8% is a year over year rate for a given month. In this case it's a 2.8% price increase August 2018 compared to August 2017. It's not the inflation for all of 2018 up to August. You must average the individual months if you want an annual rate. It's confusing, because the reporting of CPI and inflation is misrepresented, in the wording, by so many news outlets. They call it annual rate, but it's a YoY rate. Then there is MoM(month on month) rates too. The moving averages is the best number to follow, I never liked YoY.

Here is a better picture.. 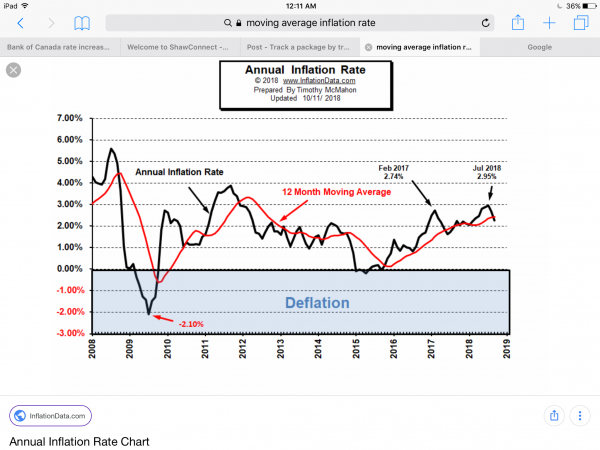 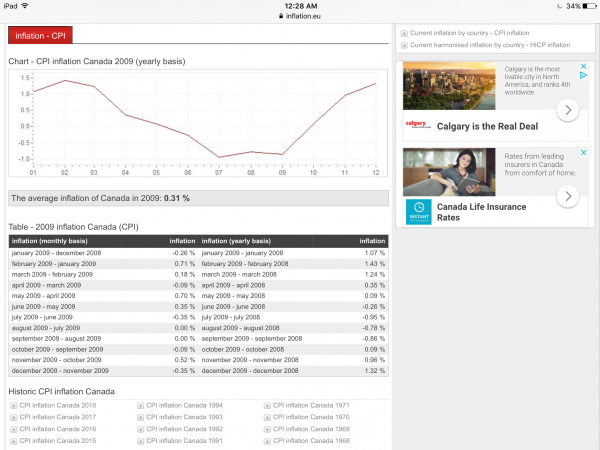 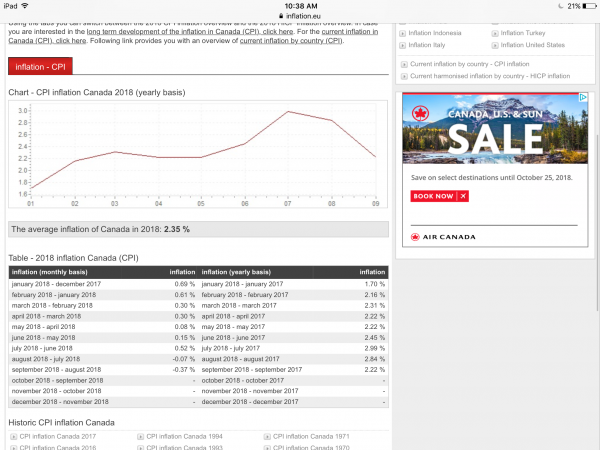 Okay Bill. Unless you are doing all your consumer goods purchases in August and no spending , at all, in the other 11 months, it's not 2.8%. Do you only spend in August? For those people, in Canada, that purchase consumer goods every week of the year, the inflation rate for 2018 is roughly 2.3%

YTD is useless, but if one is so inclined, one can look at all 8 YOY results for this calendar year...so far, and average them for a rolling average inflation rate.

All of the numbers are important, but most people don't live in a confined box. Only looking at one month YoY isn't a very good representation of the bigger picture.

Furthermore, with July at 3.0% and August was 2.8%, why didn't the BoC raise rates in September? It's because the bigger picture is more important. 3.0% is at the top of the BoC inflation target range but they know the summer driving season elevates inflation.

If we really had 3.0% annual inflation, the BoC would be raising rates way faster.

But go ahead and believe what you want.
You keep living in the one month picture.

Enjoy your 2.8% inflation. And remember to give yourself a 2.8% raise on your 2019 TFSA contribution too.

No idea what you're on about with that "one month picture" stuff, Vatox, hopefully you can get some help with that.

In any event, I'll stick with the StatsCan website:
"The Consumer Price Index (CPI) rose 2.8% on a year-over-year basis in August, following a 3.0% increase in July. Excluding gasoline, the CPI increased 2.2%, matching the gain in July."

Note the reference to "year-over-year", no reference to a month. You might want to poke around the StatsCan site, LOTS of helpful info on this topic.

Finally, as discussed elsewhere on this site the TFSA amounts go up in increments of $500, not possible to increase by 2.8%.

No bro, you do not understand what YoY means and what yearly CPI inflation is as it pertains to indexing.

You read the numbers and repeat them, but you don't understand what they actually represent. Please tell us what the 2.8% in August means, how the number was attained (described in general), and how it is utilized in CPI indexing for things such as TFSA and CPP benefits.

And please describe year-over-year and exactly what is meant.

I know these answers, I want to hear your undrerstanding.

Bill is very intelligent, please do not doubt him.

Vatox, you've come to the conclusion that I don't understand what YoY means, what yearly CPI inflation is, what the numbers actually represent, etc. You also indicated you do know these things. So you're all set, you've got this nailed, no need to pursue further.

Kidd, definitely no smarter than the average bear, I make more than my fair share of goof ups, but you do pick up a few things when you've been around a while - but thanks anyway!

I thought I did know how the inflation numbers work! I guess I'm not quite understanding them properly. Please help me Bill.

I thought this site was about sharing financial info and knowledge. I guess I'll have to keep on with my ignorance then.

Thanks for your help.

If you only look at YoY in , let's say, August, you are only assessing the increased cost for anything bought in the most recent August as compared to the previous August. Things bought in May would have had less inflationary increase compared to previous May. Over the course of a year, calendar or otherwise, the inflationary spending that we experience will be a combination of what we experienced in all months. This is usually expressed as an average of those increases. That, basically, is how inflation is calculated for purposes of benefits such as OAS, CPP etc. It is not dissimilar to the method used by index-linked funds to establish a final value at the end of the term, where they average the values of 2 or more dates.

You could argue that the government etc are wrong, and that they use this system specifically in order to minimize the increases they give us. There could be some truth to that in at least most years, but, since it's the system that is commonly used, it makes sense to use it in our own reckonings.

What, after all, does inflation mean to the average person? Most people look at their own increased costs for their gut understanding, and to StatsCan for official figures. Your gut understanding is what matters to you personally as you empty your pocketbook. The government's understanding is what affects your benefits and possibly other income sources and what you can put into your pocketbook. Neither has to do simply with year-over-year. Year over year is not insignificant, but it is not the most signficant.
There are various ways of expressing inflation, by province, by municipality, etc. The mayor of Toronto chooses to use the inflation rate that applies specifically to Toronto, which is higher than the national rate, so that he can then say he only increased property taxes in accordance with inflation. People seem to believe this from what i hear, but most don't realize that it's not the widely publicized national CPI that he uses.