I don't know what it is, but I still have an unsure feeling about EQ, probably unfounded, and it's not because they lowered their rates after a lot of us went to them. I didn't think it would last, as I'm sure nobody else thought it would either.

Does EQ Bank produce monthly PDF e-Statements and what do they look like? Wonder if someone would share a heavily redacted version of one. 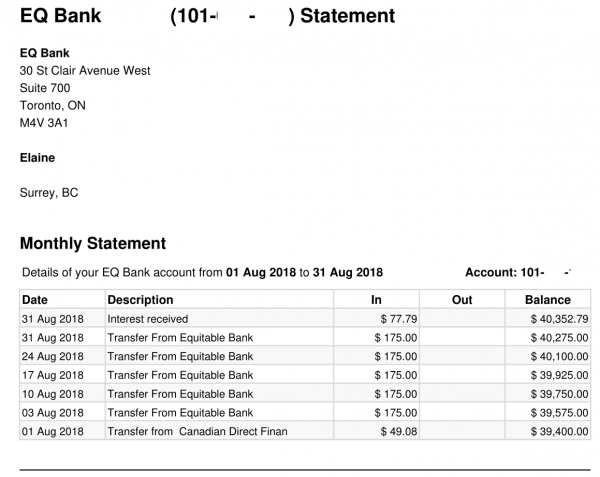 Here's one from last Aug when we were still using them.
Pretty straight forward and simple.

Wow, Loonie wasn't kidding when he (going to go out on a limb here and assume gender; perhaps dangerous in this day and age?

) said there was no fluff or "advertising of any kind". I believe it was something that he liked about EQ Bank's statements.

It is a nice, easy to read, and simple e-Statement in terms of organization and format. My only "wishes" would be to have:
(a) a small logo in the top right or top left;
(b) the "In" and "Out" changed to "Credit" and "Debit," but I guess the more plain English verbiage is consistent with their simplicity; and,
(c) Perhaps the EFT reference number in the transaction narrative.

Beyond that, a solid statement!

Bill said
Alterna, though, has daily and weekly transfer out limits, might impact if you have large balances that you want to move quickly.

By the way, isn't it illegal (maybe too strong a term) to transfer money out of someone's account after the moment of death? i.e. the deceased's assets are immediately frozen until someone presents themselves as executor, is my understanding.

Maybe so and, in a contested estate, this would be problematic. Not sure it would give rise to anything criminal, but could well be subject to civil penalties and/or liability from other heirs. In an uncontested situation, though, such as one's spouse moving assets out of a sole account into a joint one, it's unlikely to raise any eyebrows and turn up anyone's noses. So long as the deceased properly pays all taxes owing on any interest income received until the estate is finalized, it doesn't really matter (there's no tax on gifts of money - the recipient now just assumes the funds and pays the taxes). 🙂

I guess I just take a bigger picture view her and am more pragmatic about it. If the surviving spouse is to ultimately receive all funds, there's no harm here (short of a provincial government receiving an extra few hundred to a couple thousand bucks in probate fees, which wouldn't have been paid in a joint account). The only reason the funds were likely in a sole account is to arbitrage the CDIC deposit insurance limit.

Anything further about the subject (joint accounts)? I gave up writing to them or phoning them about this, as over the years the same old "script reply" got tedious to hear.

dougjp, I happened to call them yesterday about their Power of Attorney process and mentioned I wouldn't need to do all this POA stuff if they offered joint accounts but that my understanding is they keep telling people they're coming when in fact they're not coming anytime soon, can he give me the real scoop? He said the next thing to come is TFSAs, maybe by fall, and then joint accounts are next on their to-do list.

There at least seems to be some consistency in the message that they ARE c o m i n g . . .

I need a joint account much more than I need another TFSA option.

Loonie said
There at least seems to be some consistency in the message that they ARE c o m i n g . . .

I need a joint account much more than I need another TFSA option.

As I'm sure most of us do. And perhaps it took them 8 months or more ? to finalize how to launch their promotion, where they gave away free money for referral of a new account with what, an average balance somewhat less than the money they gave away?! Brilliant. And imagine working at a place where this kind of speed of work productivity was acceptable!

I had given up waiting for joint accounts and took my money out but left my account open. Today I got an email from them inviting me to take a survey regarding a potential new offering of US Dollar HISA accounts. Funny that one of the features they mentioned for the new account was "Up to 4 joint account holders".

It would be just like them to do that and leave the $CAD accounts as is!

I don't get it ... help me to understand

I don't get it ... help me to understand

For me, free (unlimited) Bill payment and Email Transfers. PDF void cheque is good too. I only put small money because of lacking joint account and lower interest rate.

I am only using them for the 3 month GICs , when they are offered at a worthwhile rate. They are just maturing now at 3%.
I have no plans to do more extensive business with them.
When the current round of 3%+ savings deals runs out, I will be looking at more rewarding places to put that money. So far, I like the look of Motive and Steinbach CU, but I expect some changes in the marketplace by January or so.

Loonie said
I am only using them for the 3 month GICs , when they are offered at a worthwhile rate. They are just maturing now at 3%.
I have no plans to do more extensive business with them.
When the current round of 3%+ savings deals runs out, I will be looking at more rewarding places to put that money. So far, I like the look of Motive and Steinbach CU, but I expect some changes in the marketplace by January or so.

You're finally considering Motive Financial, Loonie? Willing to give up your stipulation for future FI dealings to have an Ontario bank branch presence? 😉

Glad to hear it.

If you're ever on a "clean house," I'd suggest keeping your Meridian accounts for future GICs and closing your Motus accounts. I've noticed Meridian GIC rates, at least for 1, 3, and 5 year terms, are now besting Motus rates (Maurin previously said Motus would offer a premium). This suggests, at least in an early way, that Meridian may be at least discussing a future winding down of Motus Bank and transitioning customer accounts to a virtual branch transit of Meridian à la Desjardins is doing with Zag Bank. I'm upping my prediction on a Motus wind-down announcement coming from Meridian in 12 months time from December of this year.

I'm willing to consider Motive for a joint account only right now since that should not cause any headaches for spousal access. I'm waiting for the caution on my record at Equifax from the Peoples Trust fiasco to drop off, which should be this month. I don't want to try to sign up until that's done. But I will probably wait until December anyway. Motive may drop its rate before I get tp it!
Motive is only a stop-gap though. If something comparable comes along in Ontario, I will choose that over Motive - especially if it's a CU - for the insurance limits.

I think it may be a bit early for the death knell on Motus, but what do I know about how long it is supposed to take a new bank to make a profit? Did they ever disclose any targets? Not very likely. Has Maurin made any public statements about its success?

I've taken ALL our money out until at least January, even the funds for which I acquired the chequing account. That will relieve them of having to find loan destinations for it!
I am disinclined to close any accounts now that EQ has started the ball rolling with its nefarious verification set-up as reported in another thread. I fear they will all do this in due course, and I am very much opposed to it.

I don't recall Maurin saying motus would offer premium rates. What I recall is that he said they would offer comparable rates or some word to that effect which was a bit ambiguous as to whether they'd be better or worse, but that they would be in tandem somehow. It doesn't make sense, however, for Meridian to offer higher rates, given their bricks and mortar burden. I agree though that they are a better deal at the moment, although Meridian's base savings rate is quite a bit worse.
My local Meridian branch is positively humming with activity and may have to move to larger quarters. One of these days I must stop in at BigBank down the block and see what the level of activity is over there.

How long did Zag last? I don't remember. I never joined. I do recall that Desjardins was generous with customers when they closed up shop though, so perhaps worth hanging in to the end if it comes to that.

I look forward to your future monthly reports on Motus!
I would agree though that if they can't make a dent in the loans market by next summer, then they are probably dead - and Maurin may be looking for a new job or accepting a generous retirement package!
Next year's AGM could be very interesting!
Mortgage rate just went up a bit at Meridian last week.

Loonie said
I was told by an EQ CSR yesterday that joint accounts will be coming sometime in 2019.

Don't you just hate it when employees outright LIE!!!

Don't you just hate it when employees outright LIE!!!

Oh yeah.... Here's a quote from what they told me on January 20, 2016:
"We are working on the ability to offer Joint Accounts and TFSAs and are aiming to have them available in the future ".

Looking back now, they would have to have a big telescope to see that far

I won't bother with what they said since that date, they don't care, why should I.

I suppose it's useful to know you can't believe anything they say except in writing perhaps.

I only keep a few cents there any more, and sometimes buy the 3 month GICs. That's all!

They told me they would have joint accounts for sure by the end of the year. I should have asked what year!

Also told me they would have TFSA accounts the first part of the new year. I also forgot to ask what year!

If only we could charge them late penalties - something along the lines of credit card late fees, for example...
It seems they have all the time in the world to court WealthSimple, but not to look after their existing customers.

In the FAQ section of their Website it says:

We’re working on it! While we don’t yet have a launch date, our team is hard at work to get this product up and running as soon as possible. We’ll spread the word when we have more news.

I have a zero balance, but keep the account open just in case.