As the owner of a 12-person small business, I’ve been on the lookout for a no-fee or low-fee Canadian credit card solution that enables me to conveniently issue employee cards for both CAD and USD purchases. I want to eliminate the need for employees to have to use personal cards (and then have them wait to get reimbursed), and cut down on sharing company cards. Float and Caary caught my attention, and I’ve tried them both.

Float and Caary have many similarities. They’re both no-fee business cards, and you can issue both physical and virtual cards to employees. You can customize the spending limits and even expiry dates (especially handy for a one-off purchase) per card. 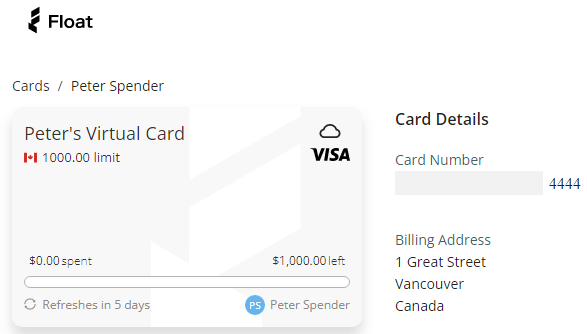 At the moment, neither card can be added to Apple Pay or Google Wallet.

Rewards and (lack of) insurance

One is a prepaid card

Float and Caary’s cards are both issued by Peoples Trust – in Float’s case, it’s a Visa and in Caary’s case, it’s a Mastercard. However, the Float card is a prepaid card, so you need to preload money from your bank account. Caary’s card is a credit card whose balance you have to pay off every month.

Both application processes are conducted entirely online. I found Float’s application process to be a bit more involved and a bit longer, as I had to submit several corporate documents and documents about co-owners. This took a few days of back and forth. With Caary, after submitting the application and connecting my bank account, I was approved in a few hours. Float appears to do more to inspect your company, whereas Caary appears to be more concerned about your bank account balance and history.

Creating cards and using their online interfaces in general is very easy. This is impressive fintech.

Both Float and Caary have very quick email support – I got a response within a couple of hours – and Float also has online chat support.

Looking at the companies’ history and founders, Float has more of a tech background, whereas Caary has more of a traditional finance background. Float also has a slicker website and admin panel interface, as well as a bigger social media following and fancier marketing.

Both are worth trying

At first, I tried Float. It was going smoothly and I was ready to recommend it to others! But only a few weeks after I had started using Float, they announced the introduction of their USD cards and the resulting 1.5% foreign exchange fee on their CAD cards. This is probably a net benefit for many companies, but I didn’t want the complexity of having to manage multiple card balances. That’s what drove me to try Caary instead, and it has functioned exactly as advertised so far. It is also attractive that Caary is a traditional credit card, because then I don’t have to manage the prepaid balance.

Both Float and Caary provide promising spending card solutions that solve some real small business needs, and I can say from experience that they are worth considering.